A very long time ago, shallow seas covered Langøya. All of Norway was covered by this sea,  with the exception of parts of Finnmark and parts of Telemark and Agder counties. The ocean was tropical, and swarming with strange life forms. To understand how the many fossils have come to Langøya, we need to go back in time a few million years. The fossils reveal something about the wildlife that existed on the island.

An island of limestone

Langøya belongs to a younger part of Norway’s bedrock. These rocks once had a much wider distribution in southern Norway, but have since been eroded away. Due to large shifts in the earth’s crust, these rocks remained in a kind of pit – in fact from Stavern and up to the lake. This is called the Oslo Region.

The rock on Langøya is mainly limestone. The limestone was in earlier times burned and the chalk was used for masonry work. This was before cement was invented. The chalk is chemically bound in the mineral calcite and is a white, soft mineral. The amount of calcite in Langøya’s limestone is an average of approximately 80 percent, but varies between 60 and 95 percent. The chalk came away from the chalk shells of dead sea creatures that lived in the sea where Langøya now is.

Settling of clay from nearby countries, together with chalk shells from a lush wildlife in the sea, built what constitutes Langøya’s mountain-bed today. This happened more than 400 million years ago in a period geologists refer to as the Silurian Period.

At this stage in the earth’s development, plant species already had many millions of years of development behind them. Yet plant life still grew as low thicket of green stalks, with mats of creeping plants in between. Most of the land areas were still desert-like.

The wildlife was about to develop into forms that could survive on dry land. Still, it was the sea which was the animals’ home in the Silurian Period. Among large carnivores at the top of the food chain were both cephalopods and scorpions. Both of these could measure 2-3 meters long! Shell remains from octopuses are among the most common fossils on Langøya. 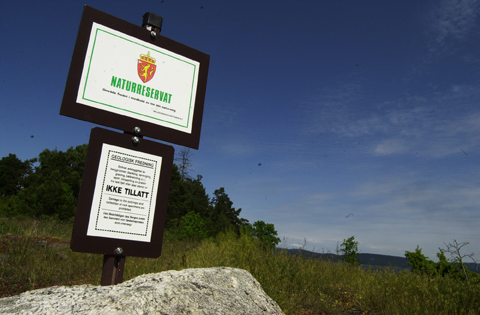 There are few plant fossils on Langøya except for remnants of some tufts of algae. These appear as a few centimetres of large lumps on the island’s eastern side. The rest of the fossils are animal remains, and most of them come from fixed coral animals. Many generations of these animals survived here. Some built the reefs made of large continuous masses of coral. In many places on Langøya animals were preserved in their original environment. It means that studies can be made on the ecology of what was once the seabed.

From the fossils on Langøya, 80 different species can be detected. There were free-swimming animals such as octopus, and ones that grew as plankton in water. An example of this is graptolites. At the bottom there lived creeping animals such as snails or burrowing animals such as trilobites. Many were fixed, and the most common fossils are parts of sea lily stalks, swamp animal colonies, sponges and corals. 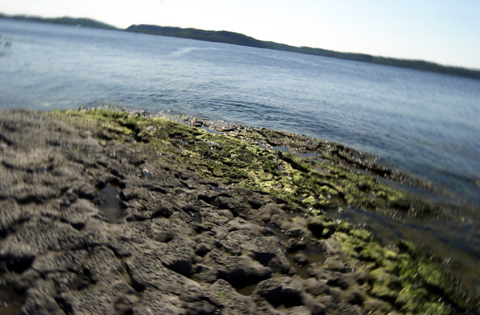 How did the fossils come to be?

Normally, dead animals in nature rot, and hard parts are broken down so that the substances are recycled as part of a natural cycle. Occasionally, conditions on Langøya were unusual so that remains of plants and animals were covered quickly by a mass of rock – or as was normal on Langøya, by clay slurry. Perhaps this chalk mud whirled up from the bottom during a severe storm. What lay at the bottom was covered over before it had time to be destroyed, but even then it was only the hardest parts that were preserved – that is, shells or shells from corals or tribolites. Soft parts disintegrated, leaving no trace.

Eventually hundreds of metres of new deposits built on top of the fossils. Water was squeezed out of the lowest layers and tribolite shell was flattened. Finally, the shell substances were replaced with new stable substances such as calcite. The shell was mineralized (petrified) and has been preserved until our time. 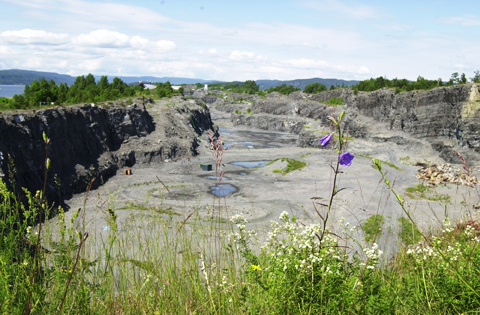