Annual surveys are conducted of the metal content in mussels and registration of organism deposits in the shoreline of Holmestrand Fjord. Surveys on seabed sediment are also conducted every five years. The surveys are implemented by Norsk Institutt for Vannforskning (NIVA).

On Langøya, readings are taken at eight different places for mussels and three places for shoreline organisms. In addition to the readings taken on Langøya, two reference stations are also used: one at Mølen in the middle of Breiangen and one at Mulodden outside Holme beach.

At all the stations, chemical analyses are conducted for polluted components in mussels, as well as registrations of flora and fauna on the shoreline. In addition, annual sediment tests are conducted in both shallow and deeper waters.

Interpreting the results from the mussel tests can be complicated, but since the start of 1994, the results have shown good environmental conditions in the sea. The results for the mussel analyses from the stations surrounding Langøya in the last six years are shown in the figure below – most of the observations are in class 1 – barely polluted, and confirms that the sea outside Langøya is barely affected by the activities on the island. 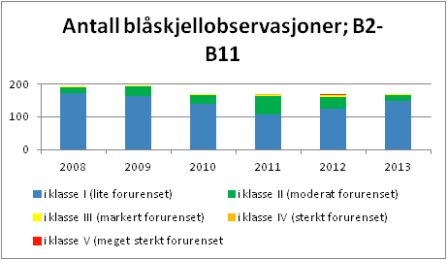 Some pollution was observed previously by the quay as a result of spillage during loading. In 2005/2006, several measures were launched such as sealed loading solutions and dredging outside the quay to prevent further impact. Analyses in recent years show that the measures have yielded good results, and the sediments have been classed as barely polluted.

Shoreline surveys show a good species diversity and proportions of species that indicate good environmental status around Langøya. In 2013, the incidence of eelgrass around Langøya was also registered, and the prevalence was found to be greater than previously surveyed. The quality was also good. Eelgrass constitutes an important marine habitat both as nursery areas and shelter for many marine organisms. The excellent quality of the eelgrass indicates good environmental conditions around Langøya.

Further information can be found in a report prepared by NIVA. Please contact info@noah.no to see this.