Before Langøya was established as a depot and treatment plant for waste, Langøya consisted of two large craters as a result of 100 years’ of limestone mining. These craters are now filled with hazardous waste, which consists mainly of heavy metal polluted plaster (CaSO4) with some inorganic production waste and other inorganic hazardous waste from industrial production.

The plaster corresponds to silt and has a relatively high permeability for water. Plaster mass as hazardous waste fills up to level 0 when it is consolidated. A drainage layer protected by a fibre cover is applied to both the top and bottom. The drainage layer is filled with standard waste up to levels approved by the Environment Directorate, and is placed in a way that will return the island back to its original state.

Depots for hazardous waste in Nordbruddet were completed in 2008. Over the plaster depot is a drainage layer and the area above this is used for disposing of standard waste consisting mainly of polluted soil and demolition waste. 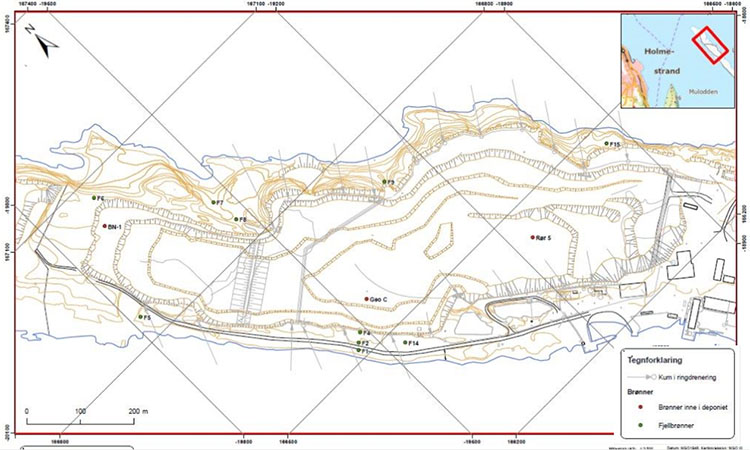 Environment wells in and around Nordbruddet

All hazardous waste received today is treated and disposed of in Sydbruddet. This is filled in much the same way as Nordbruddet with heavy metal plaster mass, and some hazardous industrial waste up to level 0 when consolidated. A drainage cover is then placed over it and standard waste is placed on top to agreed levels in the same way as in Nordbruddet.

Sydbruddet was opened for the disposal of hazardous waste in 2008. Similar systems will be set up in Sydbruddet once each depot has been filled.

The chemical and physical properties of the depot are controlled annually by NGI (Norges Geotekniske Institutt).

Wells have been dug for extracting pore water samples in both depot categories in Nordbruddet. A number of wells have also been set up in weak spots outside the quarries to check for any leaks. The results confirm previous observations that Nordbruddet is close to the sea.

In the actual depots it is mainly the content of pollutants in the pore water and the shear strength of the masses that is monitored. Water from the wells is analysed by external accredited laboratories. The chemical analyses from the depot wells show very low levels of both heavy metals and organic pollution. This shows that the heavy metals bind and stabilise well in the treated masses.